Conservatives are angry with elected officials at various levels. Right now much anger is in the direction of  the congressional representatives and senators in Congress. We can’t vote out such senators as the RINO (Republicans In Name Only) labeled John McCain and Lindsey Graham unless we are registered voters in their respective states. We can only pray, hope and maybe send some money for a primary challenger that can win against the Democrat opponent in general election. The primary challengers should be another Christine O’Donnell, Sharon Angle or Todd Akin. But after saying that, they can come from the TEA Party like Sen. Ted Cruz. Oh, we need Ted Cruz replete throughout this country.

Here I go again. Please, No 3rd party! Too many conservatives want to go that route. Of course while establishing another party, you know that the Democrats will go unfettered as you try to get the 3rd party on the ballot in each state, especially the closed primary states. Just think the Democrats will have the executive, the legislative and the judicial branches of government all to themselves and doing unrepairable damage to this country. I am still for holding on and fighting from within. We can do it. Well at least Glenn Beck believes so. I leave you with his positive charge to fleeing Republicans.

I watched Sean Hannity’s second Black Conservative program tonight. I liked what I heard throughout the program. The expressed thoughts of Meeke Addison particularly affected me on a biblical level. My Democrat party family member who did not vote to reelect the Pres. last November totally agrees with the point made by Mrs. Addison. Listen to her on folks reelecting Barack Obama to a second term. The man speaking after her is her husband. Please take note that the audio quality is not the best, but Mrs. Addison’s and her husband’s comments are well worth the listen.

Addendum: The video I first posted was removed from YouTube, so I replaced it with one of better audio quality, but it only has the comments of Meeke Addison. 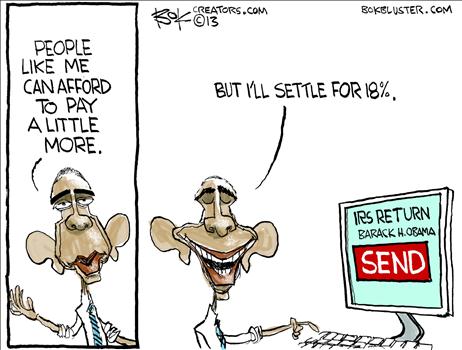 I know this is a little late, but it is still good. Last October, a woman told me she was voting for Barack Obama because he had integrity when it came to taxation. She felt that Mitt Romney with all his wealth paid less taxes than she did, and she is not financially wealthy. She liked Pres. Obama saying that wealthy folks, such as himself could afford to pay little more. I wonder what this woman is thinking now! Hey, Pres. Obama paid less and not even a little less in taxes.

If you did not hear Dr. Benjamin Carson’s speech at the National Prayer Breakfast, here it is. Pres. Obama and VP Biden were in attendance. Wow, Dr. Carson spoke his opposing conservative Christian mind!