Now I saw a new heaven and a new earth, for the first heaven and the first earth had passed away. Also there was no more sea. Then I, John,saw the holy city, New Jerusalem, coming down out of heaven from God, prepared as a bride adorned for her husband.  And I heard a loud voice from heaven saying, “Behold, the tabernacle of God is with men, and He will dwell with them, and they shall be His people. God Himself will be with them and be their God. And God will wipe away every tear from their eyes; there shall be no more death, nor sorrow, nor crying. There shall be no more pain, for the former things have passed away.”

With the Redemption Baptist Church Choir

Kirk Cameron! Remember him on Growing Pains! Today, he is such a strong witness for the Lord! Listen to him share the Gospel with 2 young ladies.

In the continuing saga of the Republican presidential primary debate schedule, there are 4 more to come. At the CNN Southern Republican Presidential Debate in Florida Newt Gingrich appeared tired and a little off his game in comparison to the last 2 debates. Mitt Romney, who came in a distant second in the South Carolina Primary stayed on Newt’s heels. Mr. Romney’s biggest problem to me is the government health care he established while Governor of Massachusetts and not what he does with the money he earned. The health care thing is going to continue to dog him.

Ron Paul had a couple of good responses, but why bother?  He is not going to be the next President. Neither is Rick Santorum, although from reading tweets last night and reading and listening to the political pundits, he was the winner of the Southern Republican Presidential Debate. Mr. Santorum was strong in calling out the other candidates on their records, but as one tweeter kept tweeting, “he did not give solutions on the issues.”  As much as I like him, I think Mr. Santorum will go the way of Rick Perry, Jon Huntsman, Michele Bachmann and Herman Cain in a couple of months or so.

I am somewhat shocked by conservative and Republican reaction to Newt Gingrich as a loose cannon. They are coming out of the woodwork to denounce him. Pres. Obama supporters love watching us “eat our own.” They see it as a wonderful detriment to Republicans making Pres. Obama a 1-term President. The denouncements are so disheartening, but I am paying attention to what they say, especially those who were under his House Speaker leadership.

When Wolf Blitzer asked a lightweight question dealing with why each one of their wives would a better 1st lady, the tweets were not positive for Mr. Gingrich. Here is  a part of a tweet response: “…Not a good question for an ex mistress.” You know his past marital infidelities are going to dog him for the rest of his life, but I do put more emphasis on him admitting his wrong doings and seeking the Lord’s forgiveness in weighing the pros and cons for giving him my vote. Hmm, my vote! Well, I hope the Republican primary/caucus season last long enough for my vote to count for either Newt Gingrich or Mitt Romney or even a miraculous possibility of Rick Santorum. 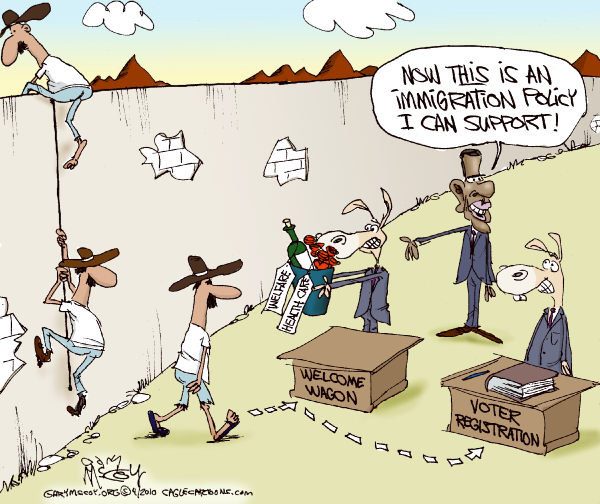 I previously stated that some Republicans who are for allowing illegal immigrants to remain in this country are into cheap labor. This editorial cartoon from September, 2010 is still true today of the Pres. and the Democrats who support making U. S. citizens of illegal immigrants.

And was declared to be the Son of God in power according to the Spirit of holiness by his resurrection from the dead, Jesus Christ our Lord.