There were some great responses in this latest Republican debate in Florida, but it is still comes down to the front-runners being Mitt Romney and Gov. Rick Perry at this point in the race to become the GOP’s presidential nominee. Michele Bachmann was in true great form, but I do not think she is getting back her former supporters that went over to Gov. Perry. Herman Cain was fantastic. If/when we have the next Republican administration, Mr. Cain should be in it dealing with the economy/fiscal matters, or Georgia folks needs to elect him to represent them in the House or the Senate.

I grew to love Newt Gingrich and his debate performance is great again, but it will surprise me if he makes it to #3 in the early caucuses and primaries. Ron Paul is not in my consideration. I can in no way go along with his views on Islam and Muslims in relation to terrorism and his views on legalization of drugs. Therefore, I hardly listen to his responses in the debate.  The same goes for Gary Johnson who also has that libertarian laissez-faire thing for drugs. Jon Huntsman is way too likable by the Democrats, so forget him! Rick Santorum did okay, especially when he hammered Gov. Perry on providing in-state tuition rates for illegal immigrants. But it will surprise me, if he gets anywhere in the early caucuses and primaries.

I do not have a personal stake in anyone among the Republican presidential hopefuls at this point, but I could go with either front-runner Perry or Romney (despite RomneyCare). I think either one would be more successful as President in comparison to Pres. Obama. As I said in previous posts, Herman Cain needs to succeed at getting elected to a lower office before going after the highest office in the land. Paul, Huntsman and Johnson are the ones that give me great reservations, but thankfully, they do not have much of a chance anyway.

If you love Me, keep My commandments.

Laying fines on Christians in this country for practicing and teaching their faith from their homes seems pretty ridiculous. Does it not? Well it is not so ridiculous. Some people holding bible studies in their homes are unaware that they are doing something wrong and are receiving fines of $300.00 on the West Coast. In a few cities such as San Juan Capistrano in sunny California, officials are enforcing city code section 9-3.301. It does not allow for people to conduct bible studies in their homes without a conditional use permit. Obtaining that permit can be rather costly.

Some are saying city ordinances are broken, because bible study for small groups being conducted in someone’s home is tantamount to a religious organization conducting services which the city code prohibits in residential neighborhoods without a conditional-use permit. That is pretty outlandish since the city of San Juan Capistrano was founded as a Christian Mission! Read more here.

I know this is not in the same category with the heavy persecution of Christians in other countries, especially Islamic ones where one can be put to death for doing anything in relation to Christianity, but American believers in the Lord Jesus Christ should not ignore, lay down and allow the taking away of our “faith practice” freedoms one iota.

Ed Schultz of MSNBC was out in Ohio with the folks who are against Gov John Kasich and the Republicans’s common sense approach to dealing with economic issues. He interviewed Toledo, Ohio’s Mayor, Mike Bell who ran as an Independent. Mr. Schultz is for taxing the wealthy to help meet union demands for worker salaries and benefit increases. Click on the image to view the video of the interview. Listen (midway) for the bottom line response from Mayor Bell on why he supports Ohio’s Issue 2, despised by leftist liberal thinkers, especially those connected to unions. Hint – Can’t work with non-existent money! The Mayor is firm and does not back down. Read more here. 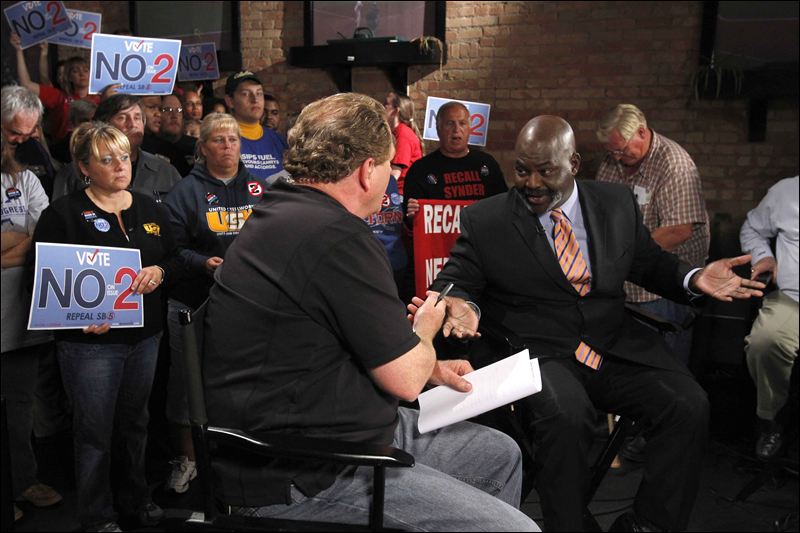 During the weeks while I was away from blogging, folks on the Democrat side kind of went off the emotional rhetoric charts on the Republicans and especially the TEA Party. Well the verbal attacks have always been in play. For example in July, Minority leader, Nancy Pelosi talked about the Republicans wanting to destroy. By late August, it just looked like the Democrats started a concerted effort with verbal attacks on the TEA Party! Members of the various TEA Party groups received the terrorist label from  Vice Pres. Biden along with other House Congressionals. 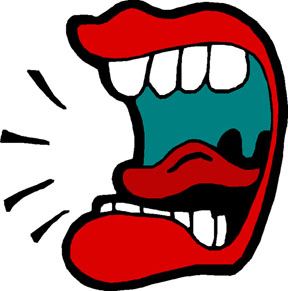 Emotionally charged rhetoric from members of the Congressional Black Caucus (CBC) started off with the proud and defiant Maxine Waters publicly telling the TEA Party to “go straight to Hell.” Then CBC member,  Rep. Frederica Wilson said the “TEA Party is the real enemy.” Another CBC member, Rep. Andre Carson came out a few days later and said, “the TEA Party wants blacks hanging from a tree.” He first stood by his statement and then later attempted to walk it back a little.

Jesse Jackson made inflammatory comments against the TEA Party. Read and listen for them here and here. A firmly rooted Democrat that I spar with online put out the fallacious equation  that the White Citizen’s Council + the KKK=The TEA Party. That status statement received far more support than challenges. People on that ignored my question about them disobeying the President’s call for civility. Since they cannot tout the accomplishments of the Obama administration except for the demise of Osama bin Laden, they go on the attack.

It is normal to get the back and forth attacking rhetoric from the opposing political parties as we get closer to major elections, but the charged rhetoric at these levels this time around are already going too far and it is not yet 2012! Democrats chose this tactic to “gin up the base,” because many in the base have lost heart with Pres. Obama. Some older folks who never voted before and younger ones who did not take voting seriously came out of the woodwork to get registered and vote for Barack Obama in 2008, are  indicating that they will stay home in 2012. The Pres. wants us to think he is far above this charged rhetoric fray, but as the editorial cartoon suggest, he pretty much is orchestrating and conducting it all.